Employee Capital Plans (PPK) legislation, passed in October 2018, is coming into force this year. The largest polish employers must create prospects for PPK from the July 1st. The deadline for the remaining entrepreneurs depends on the number of employees and company status.

Employee Capital Plans are the foundation for an innovative, public, and private pension system for employees, operating independently from the Social Insurance Fund. The employer will be responsible for the efficiency of the PPK, with financial support from the state budget. The employers’ duty (according to the law) will be, among others, signing favorable agreements with financial institutions, monthly premiums payment, and sharing information about the saved capital.

The requirement to create a PPK inside the companies’ payroll structure covers “economic entities employing at least one sole proprietor, for which they pay contributions to retirement and disability insurance. A sole proprietor may be an employee on a contract of employment, a contractor, a member of the supervisory board, or a worker who performs outworking.

When exactly will PPK come into force?

In the largest companies, employing more than 249 employees, the PPK should be established from July 1st, 2019. The process of implementation is considered complete when the management agreements are signed, both with the chosen insurance company and the employee side. The smaller companies will go next, and since the beginning of 2021, the public sector and micro-entrepreneurs, according to the following schedule.

According to the act passed in October last year, employers must sign two types of agreements: for managing and running the PPK. A first type is a contract between an employer and a selected insurance company (like TFI or TFE funds). The legislation requires that the choice of an insurer must be made in agreement with the employee’s side (like employee committee or trade union representatives). Companies should finalize the contract no later than 10 working days before the date of signing the contract for running the PPK. Its’ contents must include general provisions, payment dates, and conditions for changing or terminating the contract.

The other agreement is a contract between the insurance company and the employer on behalf of each employer. Specifically, it concerns a particular employee, not employees as an overall group. Therefore, the employer must ensure that the conditions of the contract are as beneficial for employees as it gets. The agreement for running a PPK should function no later than the 10th day of the month after completing three months of employment in the company.

Who avoids the obligatory PPK?

Although the PPK is a generally applicable program, there are exceptions. The group of employers who are exempt from the necessity to create and run a PPK includes:

New JPK_VAT from April 1st – what should be remembered?

Due diligence in withholding tax 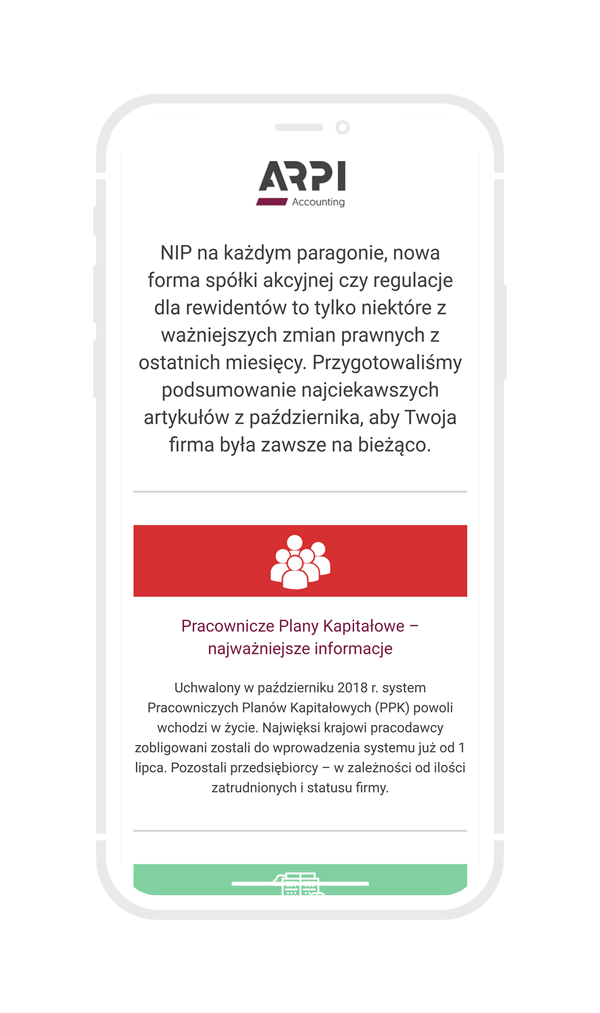 Subscribe to the ARPI Accounting newsletter and receive special summaries of the most interesting articles of the month.

ARPI Accounting is a part of ARPI Group, a Norwegian holding which started to operate in Poland in 2001.